Babbacombe & St Marychurch Rotary Club has just awarded Norrms McNamara with a much deserved Paul Harris Fellowship Award for all of his outstanding work setting up the Purple Angel Campaign and the Torbay Dementia Action Alliance. Norrms has been living with dementia for 6 years and he and his wife Elaine have dedicated their lives to helping supporting people with dementia not just in his home town but across the UK and now the world. 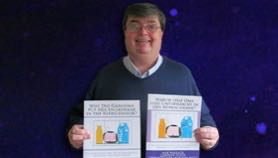 HOW WE STARTED OUT

The Purple Angel was born on 12th January 2012. It was formed as a steering group to try and make Torbay the first Dementia Friendly resort in the country.

Norman McNamara a resident of Torbay, Devon, UK was diagnosed with dementia at only 50 years of age. Whilst out shopping one day he was rudely spoken to by a shopkeeper and decided to change the way people see dementia and treat others.

Norrm began by asking his local shop staff to read 2 pieces of information so that they could better support people with dementia and their carers. He wrote the “Guide to Understanding Dementia” and put that together with “What is Dementia” written by our Alzheimer’s Society. Two weeks later he returned and, if staff had read, awarded a Purple Angel Logo for their window.

Through Facebook Norrm met many who wanted to join in. The purple angel was named because Norrm fondly refers to his wife Elaine as “his angel”!

On the 16th November, 2013, the first 50 world wide ambassadors were inagurated in Paignton, Devon, UK. There are now well over 1000 ambassadors, all with their own teams of volunteers.

"There are now over 1000 ambassadors"

Many towns in the UK began raising awareness with The Purple Angel, taking the information to their local shops and businesses. On a facebook “Dementia Aware” page many others began to form dementia friendly communities and were inspired by the success of the project. Many Purple Angel Dementia Action Alliances now have their own steering groups and the word is spreading to other areas. It became apparent that many other organisations were needed to be included such as hospitals, first responders, rescue services, schools, scouts, etc. and resources were developed to address different situations. A book was written for young school children by Max Wallack in the USA and is being translated into other languages by purple angel ambassadors and talks held in schools in order that our young can grow up understanding dementia.

In places new memory cafes were organised and events took place across the world for the new Dementia Awareness Day fundraising for dementia charities all year.

Many countries across the globe joined in the campaign and Dementia Friendly Communities started up together with Memory Cafes and other initiatives.